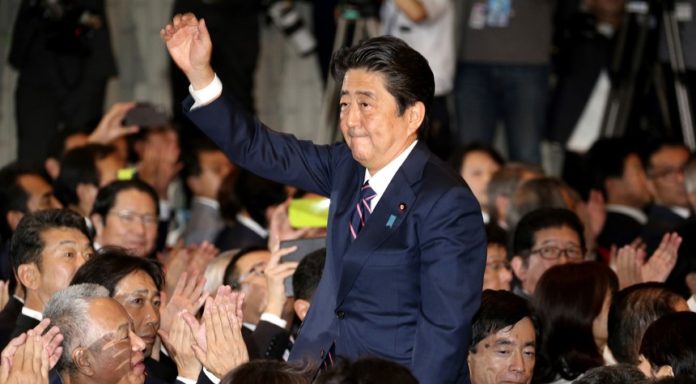 We reported previously on the shocking news about Shinzo Abe, the Japanese Prime Minister, who was a long-time friend of America in fighting against communist power.

The tragedy triggered a worldwide reaction. Nearly everyone said something to recall the man, who was a strong statesman and friend. Because for a while, the White House was absent, I’m calling it “almost everyone”. The White House’s silence was quite noticeable as more statements were made by world leaders, including one from Vladimir Putin, Russia’s President.

Biden finally issued a statement. The statement contained remarks about the slain man, which managed to be hollow despite some of its contents including personal experiences. It also mentioned how his leadership of the Japanese people was great, but the White House couldn’t contain itself in the end. As is their leftist creed they couldn’t let this tragedy pass and decided to push some politics behind Abe’s passing.

Biden’s statement read: “While we don’t know all the details, we know that violent attacks are not acceptable and that gun violence always leaves deep scars on those who are affected by them.”

Biden statement on assassination of ex-PM Shinzo Abe of Japan: “While there are many details that we do not yet know, we know that violent attacks are never acceptable and that gun violence always leaves a deep scar on the communities that are affected by it.” pic.twitter.com/RWOO2EkVsC

Abe was Japan’s longest-serving Prime Minister. During his tenure in office, he did a lot for Japan and the rest of the world. He deserved more respect from the leader of the free world than having one party’s agenda put in a statement that would be etched in the history books.

That’s probably why Biden’s handlers included it in their statement. A statement from Japan’s closest ally, which will be used to discuss the future reaction to Abe’s death will be read. This statement will include a call for gun control.

Japan has extremely strict gun control laws. Their laws have been in force since 1958 and state that no one shall own a firearm, sword, or any other weapon.

It is disgusting, but it is typical of the left to be so focused on their agenda that they will use the assassination of a world leader to advance their own narrative.

Abe deserves better. But when it comes to the radical western left, you shouldn’t expect “better”.