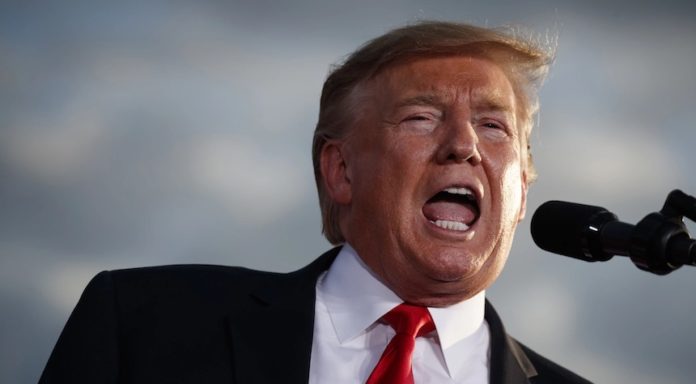 Trump’s lawyers stated to the Supreme Court that “The Eleventh Circuit did not have jurisdiction to review, or stay, the interlocutory orders of the District Court allowing the Special Master to review materials taken from President Trump’s home, including approximately103 documents that the Government claims bear classification markings.” “This application seeks only to invalidate the portion of the Eleventh Circuit’s Stay Order that limits the Special Master’s review of documents bearing classification markings.”

The DOJ won last month’s decision by the three-judge panel. The appeals court reversed Judge Aileen Conn’s ruling that the DOJ had to give classified documents seized by the DOJ to Raymond Dearie, special master judge, for independent review.

“The extraordinary circumstances presented by this matter — an investigation by the Forty-Fifth president of the United States by his political rival, successor — forced the District Court to admit the significant need to enhance vigilance and to order that the appointment of a special master to ensure fairness and transparency and maintenance of public trust,” Trump’s lawyers said to the Supreme Court on Tuesday. They claimed the appeals court did not have the authority to make such a ruling.

Trump’s lawyers stated that Trump’s unwarranted stay should be lifted as it impedes substantial the ongoing and time-sensitive work by the Special Master. A limit on the thorough and transparent review of material seized during the extraordinary raid at a President’s house is a threat to public confidence in our justice system.

Cannon, a Florida district court judge, appointed Dearie as special Master last month. She said that the Government was temporarily prohibited from reviewing and using the materials seized for investigation purposes, in the interim of the Court order or special master’s review.”

She said that her ruling did not hinder the Office of the Director of National Intelligence’s classification review and intelligence assessment related to the August raid records.

Cannon refused to give up, but an ODNI official said last month to the Washington Examiner that the classification review had been “paused” after consulting with federal prosecutors. After the appeals court ruling, it resumed its assessment.

The DOJ quickly appealed to the 11th Circuit and claimed that suspending the FBI’s criminal investigation and continuing the ODNI damage assessment was essentially impossible.

The DOJ argued that the Intelligence Community’s review of and assessment can’t be easily separated from the Department of Justice and Federal Bureau of Investigation activities in connection to the ongoing criminal investigation. Uncertainty regarding the Court’s order’s bounds and its implications for the activities of the FBI has caused the Intelligence Community to temporarily halt this crucial work. “Moreover, the government is and will continue to be irreparably hurt by the enjoining of a criminal investigation into matters that pose risks to national security.”

Circuit judges Robin Rosenbaum, an Obama appointee, and Andrew Brasher were unanimously in favor of the DOJ. Britt Grant, a Trump appointee, and Andrew Brasher, all agreed with the DOJ. They also said that Cannon had “likely error” in her ruling halting the DOJ criminal investigation. Dearie was required to examine the 100 documents marked with classified markings separately.

The appeals court stated last month that they decided only to answer the narrow question: “Whether the United States has established that its entitlement to a stay on the district court order is valid to the extent it (1) requires that the government submit for the special masters review documents with classification markings and (2) prohibits the United States using that subset in a criminal investigation.” We conclude that it has.

Trump’s team claimed Tuesday that the Eleventh Circuit’s Stay Order should not be vacated in its entirety. They also argued that “under the extraordinary circumstances present here, the District Court did not abuse its discretion in appointing the Special Master to review materials seized from President Trump’s residence.”

The special master cast doubts on the claims of the former president regarding declassification during a court hearing last week.